www.merrithew.com:After becoming functionally paralyzed, patient found his way back to health— and his outdoor pursuits— through traditional rehab and Pilates

www.merrithew.com:Ask the Expert: How to maintain a healthy and mobile spine at any age

www.merrithew.com:After becoming functionally paralyzed, patient found his way back to health— and his outdoor pursuits— through traditional rehab and Pilates

After becoming functionally paralyzed, patient found his way back to health— and his outdoor pursuits— through traditional rehab and Pilates 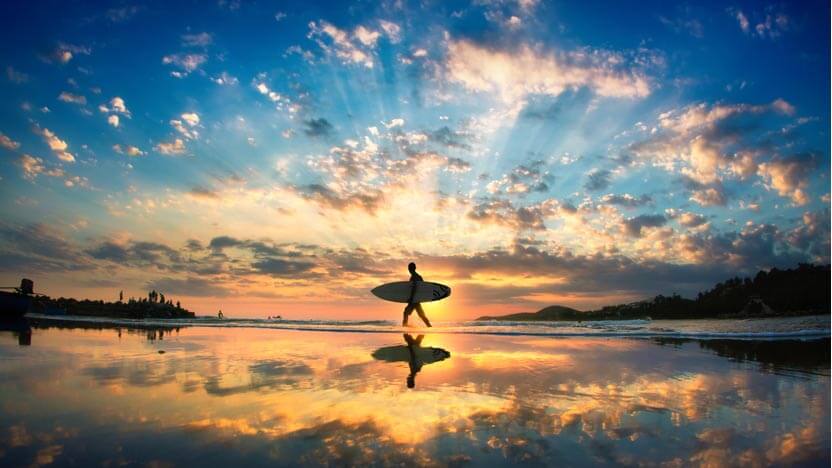 In a matter of 24 hours, Peter van der Velden went from being an active surfer, skier and mountain biker to a functionally paralyzed patient in intensive care at a Toronto hospital.

It was June 14, 2019, the Toronto Raptors had just won their first NBA title and Peter had recently recovered from the flu. He woke up that morning and set off to work, but the same walk he did every day took him about 20 minutes longer than usual.

Working in the health care sector, Peter approached a clinician at his office about his gait problems and he urged him to go see a doctor. The doctor at the clinic across the street was alarmed by his deteriorating condition.

“I’ve never seen this in my entire career, but I think you have something called GBS. You need to get to emergency right now,” he was told.

Peter walked into the hospital’s emergency room on his own power. By the next morning, he couldn’t walk. By noon, he’d lost most of his arm function. By the end of the day, he was functionally disabled.

He was diagnosed with Guillain-Barre syndrome (GBS), a rare neurological condition in which the body’s immune system attacks its peripheral nervous system. The disorder affects one in 100,000 people every year in the U.S.

After 5 days in the ICU and a total of 10 days in acute care, Peter was transferred to Bridgepoint Active Healthcare, a 464-bed rehabilitation and complex care hospital in Toronto, where he was admitted as an inpatient.

“I couldn’t walk or do anything, I was completely incapacitated. I had to have someone do almost everything for me,” Peter says. “The only thing I could do when I first got to Bridgepoint was sit up in my bed. They assess you on a 60-point scale and I was a five out of 60 when I got there.”

Peter began his long road to recovery, starting with 30-days of inpatient care and then three months of outpatient therapy.

Having led a healthy and active lifestyle prior to his diagnosis, Peter made significant gains during that first month, relearning how to walk and climb stairs, but he was still far from achieving his ultimate goal of being back on a surfboard or bicycle.

“It was clear from his gait pattern that there was residual weakness that needed to be addressed; he had a Trendelenburg gait, foot slap, and reduced trunk stability. Stairs took great effort and he lacked the ankle strength to perform a plank, much less heel raises,” says Ellen Leung, his outpatient physical therapist at Bridgepoint, whom he worked with for three months.

“The challenge with GBS is that the disease itself, in addition to prolonged sedation in the ICU, causes a great deal of generalized weakness that has a long and unpredictable recovery. This weakness being a result of both neurological and musculoskeletal pathology requires a more layered approach. We targeted muscle recruitment, activation, proprioception, range of motion, coordination, postural control, endurance, and proximal, as well as foot and ankle stability,” Ellen says.

As a physical therapist who also trained as a Pilates instructor, Ellen recognized the many benefits that Pilates could offer Peter, so she began incorporating it into his treatment.

“Pilates equipment like the Reformer, Stability Chair™ and Vertical Frame provide a large variety of options for optimal strengthening. Specifically, exercises categorized as eccentric, closed chain/modified closed chain, with movement through full available range are known to be very effective and make up the majority of Pilates repertoire.

“Furthermore, in the rehab world, the option to have the client’s trunk supported with higher level exercises such as deep squats, heel raises and jumping/hopping can help expedite progress. Trunk support also gives much needed feedback for some clients with altered perceptual awareness. With increased familiarity with the equipment, more options can be provided for trunk-on-limb and limb-on-trunk movements,” Ellen says.

Unfortunately, Bridgepoint didn’t have any Pilates equipment, so Ellen introduced Peter to Pilates Matwork and gave him a comprehensive pool program which he followed diligently while at his lakeside cottage.

“In the absence of a Reformer with Cardio-Tramp® Rebounder, I had Peter on a mini trampoline with a railing for support for postural control and ankle activation and stability, eccentric quads and soleus strengthening. He also did lots of ankle work while standing on a wobble board, which is similar to the Mini Stability Barrel™ Lite, or on the BOSU® or half Foam Roller™ for ankle activation and strengthening,” she says.

Peter made vast improvements in all aspects of his treatment, including balance, strength, activation, postural control, gait quality, and endurance.

“In more functional terms, his gait became ‘normal’ to a point where strangers didn’t notice him on the street. Single leg balance improved to 45+ seconds, up from one or two seconds at the start. He could also run again! Stairs became much easier and he was able to go up two at a time for several flights in his building. Most importantly, however, it was gratifying to see that Peter was pleased with his progress toward returning to baseline,” Ellen says.

Halfway through his treatment, Ellen recommended that he complement his rehab care with Pilates outside the hospital. He enrolled in group classes at Body Mason, a studio in Toronto, and began going four times a week, sometimes doing back-to-back classes.

“When I started at Body Mason in October 2019, I couldn’t do any of the exercises where you stand on the Reformer carriage and push it apart. It literally terrified me because I had no balance,” Peter says. “A couple months later, I was doing all that stuff and feeling really comfortable about it. For me, that was a humongous transition.”

With his positive attitude and willingness to put in the work, Body Mason owner Emma-Kate Miller remembers how quickly Peter improved, advancing from the Restorative and Essential-level classes to Intermediate Reformer and Level 2 Body Conditioning.

“Pilates is an excellent stepping stone during or after rehab. Giving people the gift of movement is a game changer, and doing it in a way that feels safe and supported gives people a sense of hope,” Emma-Kate says. “I like to call my studio the room of possibilities. I help facilitate movement and they discover the joy that comes with that.”

Now, just over a year since his diagnosis, Peter is nearly fully back to his baseline, or pre-GBS level of functionality— and he continues to regularly practice Pilates on his Reformer at home.

“Pilates played a big role in getting my functional movement to where it is today,” he says. “Pilates helped me get my balance, strength, muscle and fine motor control back. It was significant to my recovery.”

While Peter still has some residual muscle spasms and hand twitches, he considers himself incredibly fortunate.

There are many different variants of GBS and degrees to which people are affected. How GBS patients present and recover varies widely, so a thorough assessment guided by client-centred goals is helpful in designing the right rehab program for individual patients.

“When you talk to the doctors, they say that most patients will recover their functionality over a multi-year period. But what a clinician considers ‘functional’ means you can walk out of the hospital and eat by yourself,” Peter says. 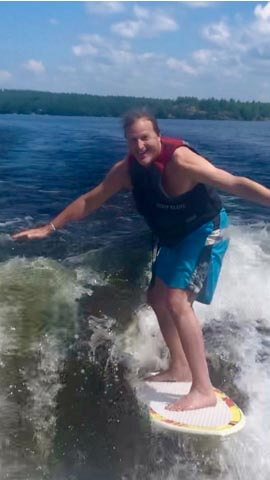 “I consider myself functional when I can do the outdoor activities that I love to do, like riding my mountain bike, going surfing and paddle boarding. That’s functionality to me, and this summer, I was able to do those things. I can do the things that make my lifestyle and my life really complete.”

“It’s very perspective-enhancing to spend 42 days in hospital. …People can carp on the health care system all they want, but if you’re really sick, like I was, the care and level of engagement is spectacular,” Peter says.

“Being a patient makes you appreciate our reliance on others and I made this donation with the goal of helping patients like me get better as quickly as possible.”